A Greek salad on Dispute; knowing your legal image rights

Not long ago a customer of ours received an invoice from Pixsy Inc. (USA) stating that they are required to pay a fee for the use of an IPR protected photo of a Greek Salad.

Greek salad or “horiatiki” salad is a popular salad in Greek cuisine generally made with slices of tomatoes, cucumbers, onion, feta cheese and olives, and seasoned with salt, pepper, Greek oregano, and dressed with olive oil. Common additions include green bell pepper slices or caper berries.

The legal paper that accompanied the invoice was legit, referring to case numbers and was quite well built.

We investigated the case and we responded to the legal claim sender:

The photo in dispute has been removed on the 22nd of November 2019 at 13:00 GMT+2, since we received your 2nd notice, as the first was received on our spam folder.

We chose the photograph in dispute driven by the following information found on Google. We chose a “Greek salads and feta” photo with the “labeled for reuse” attribute checked on Google search, as you may see in screenshot 1 below. 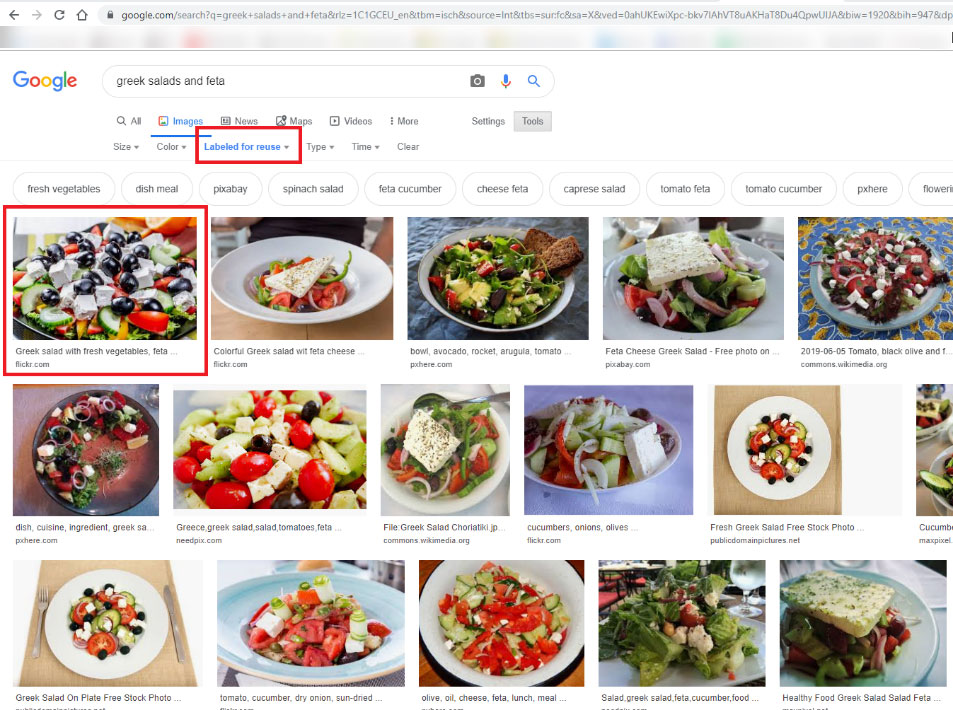 This photograph was published on our website on the 4th of September 2019.

The photograph in dispute, originally posted in Flickr, is stated to be used under Creative Commons 2.0, as shown in Screenshot 2, below. 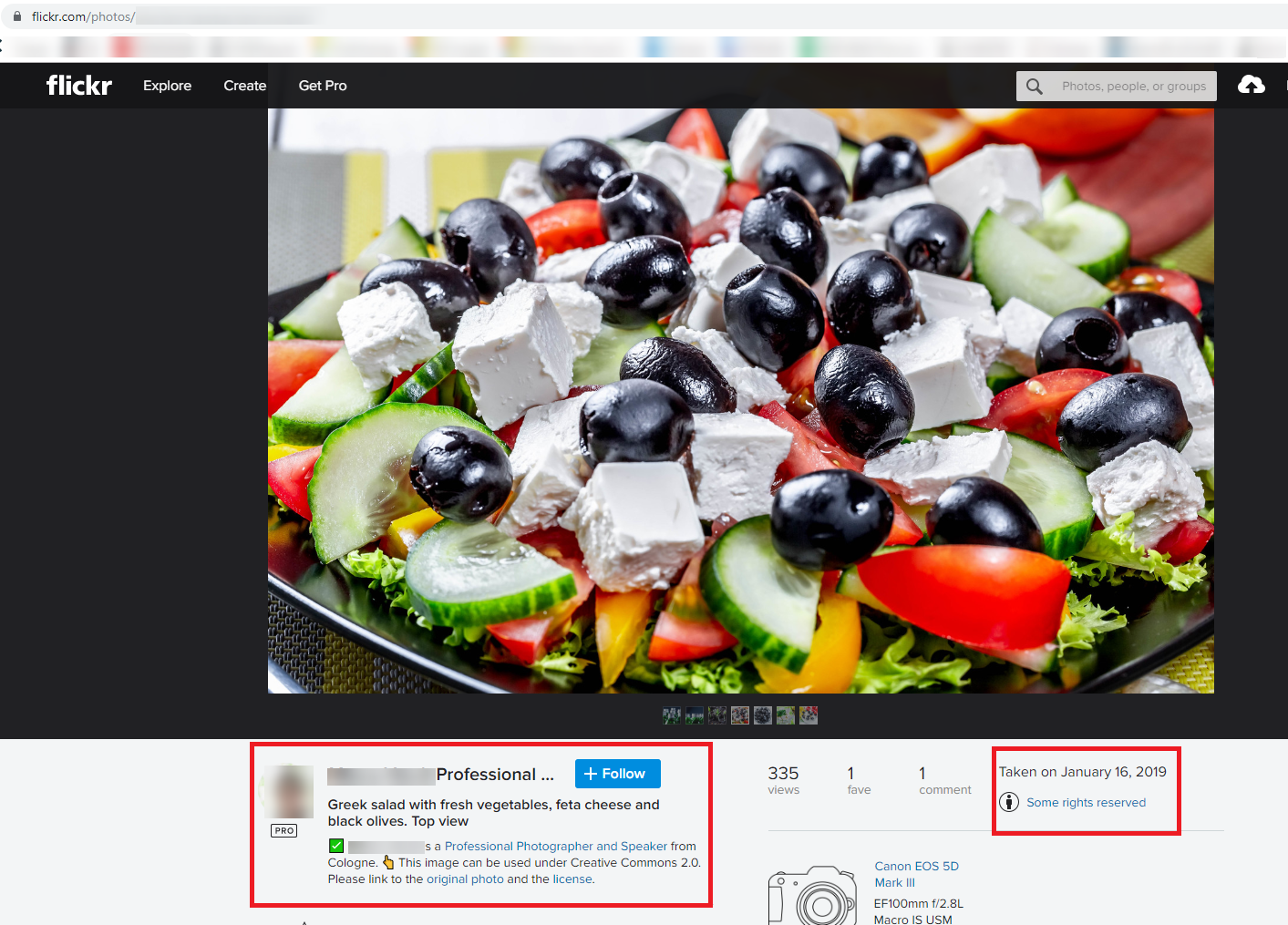 Based on the Creative Commons 2.0 link provided on the Flickr page with url: https://www.flickr.com/photos/30*****N08/399******3 , that contains the photo in dispute, the user is free to share and adapt under the term of Attribution (Screenshot 3). 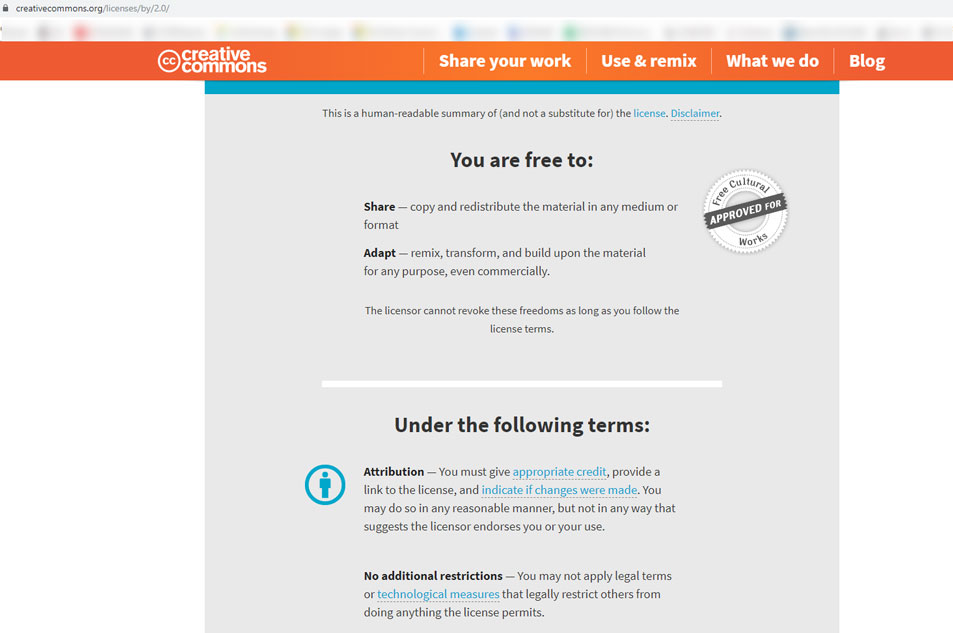 It seems, that you neglected checking the copyright section on our website, which is still as in Screenshot 4 below.

We should also point out that according to photo download permissions on the Flickr Help, if a photograph owner wants to prevent others from downloading his photos, he can set the default license to “None”, which apparently your customer did not do.

This is shown on Screenshot 5 below. 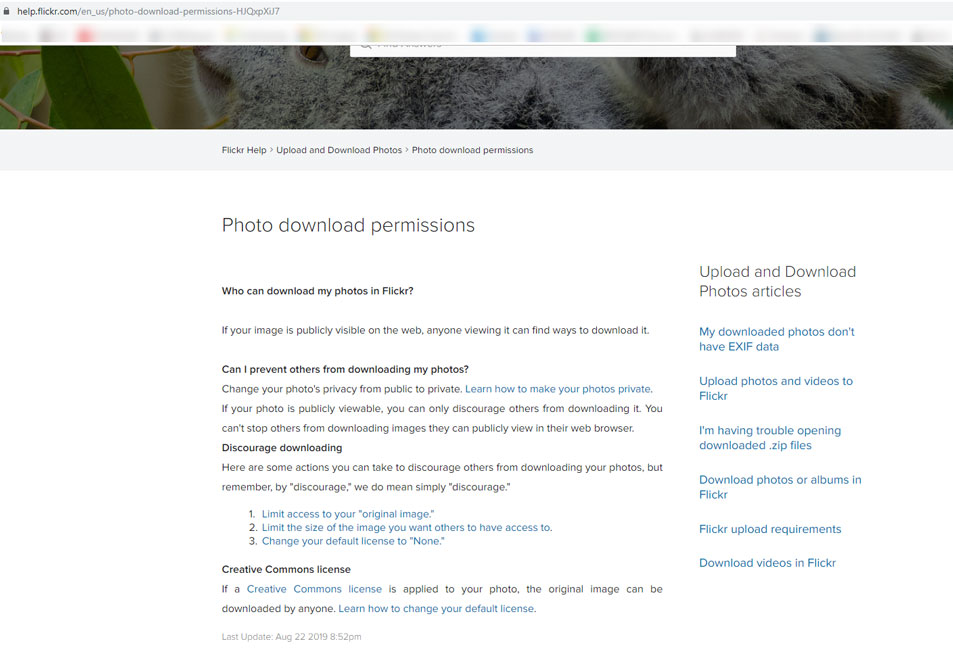 At this point I would like to note that the cooperation of your company, Pixsy with Flickr, as stated in the https://blog.flickr.net/en/2019/04/09/flickr-partners-with-pixsy-to-fight-image-theft/ , posted by Leticia Roncero, Community Manager at Flickr and the fact we are receiving an official letter from Pixsy, asking for intellectual rights money, while the photo is labeled as free for reuse, drives us to consider your letter rather offensive.

Given the above and as we removed the photo from our website, we do not accept any invoice or other charge concerning the use of the photo you refer to in Case Reference #002-XXXXXX.

It has been 8 months now and we have not received a reply to the above email.

A reddit thread found below shows that this is a standard practice from Pixsy Inc.

Unfortunately for the people referring to the reddit post, Pixsy does exist, and indeed has acquired the right for IPR disputes from Flickr. However the fact that the company does not respond to our e-mails, referring to invoice rejections from our side,  and sends out only emails, takes us to the thought of considering Pixsy an act of mass (semi) automated IPR request or a “legal Nigerian fraud”.

We consider replying to such a claim is mandatory and not let it get away, as they may come back in the future.

Whatever the case maybe, make sure you use free for re-use images as you may get into a legal dispute that will bring you and your customers unnecessary frustration.